The purpose of NZMA is to promote mosaic art in New Zealand.

It stands to reason the artist chosen for our spotlight will be a New Zealand artist whose work is widely admired within New Zealand and beyond. We look for an artist with a substantial body of work that shows creativity, increasing skills and commitment to the artform.

It will likely be an NZMA member who has participated in NZMA activities such as exhibitions, development of the website, and who has encouraged other artists to reach their potential.

In 2018 Con Kiernan is the obvious choice.

Con is a a full-time artist with a gallery of completed commissions and winning entries in national mosaic exhibitions.

He is a consummately New Zealand artist who started his late blooming mosaic career with a focus on New Zealand’s unique native flora and moved on to works commemorating historic events such as the visit of Janet Erskine Stuart to Baradene College or the mining history of his local Karangahake Gorge.

Con has provided his own account of his development in mosaics in the Member Gallery. As he tells us there, he moved from a career in design to ‘an ancient artform that has stood the test of time’. But as a glance at any of his works makes clear, careful design remains a characteristic of his work. So is the sheer hard work of selecting and shaping each individual tile, shard of glass or chunk of stone to achieve the shapes and folds seen in earlier work such as ‘Kowhai’, in the face of the miner in ‘Just Hard Work’ and the beautiful drape of the cloth in ‘Community of Saints and Sinners’.

Rich colours attract our admiration in pieces such as ‘Matai Trunk’ and ‘New Life Ambry’. Even grout can be an essential major feature as in ’Puka’. As Sonia King said, “Con’s spiderweb use of tile, glass and grout is as good as I have seen anywhere”.

He was the first New Zealand mosaic artist to be featured in Grout, the magazine of the British Association for Modern Mosaics in 2006 and was invited to review Global Mosaics in 2007.

Con initiated the first national mosaic exhibition in Waikino in 2011. He continues his own growth as an artist and leads others development by example. 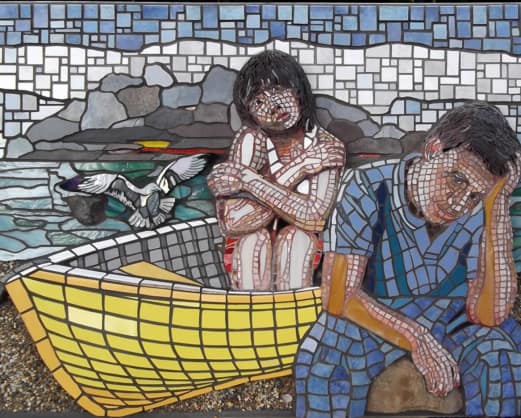 View more of Con Kiernan’s work in our Member Gallery

New Zealand has a vibrant community of mosaic artists. View their work in our Member Gallery.

Enjoy inspiration and support from the NZMA community. Find out more about the benefits of membership and join today!